I’ve got a 40d in my hands, which has been “repaired” by the owner.

The err99 was probably caused by the shutters flex cable, which was not inserted into it’s connector.

The black cable of the main mirror motor was pressed between the front cover and the metallic plate – the cable was practically blanked, and fixed tightly to the ground. 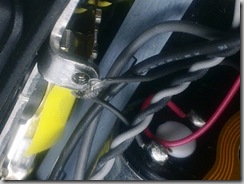 After cutting the damaged part, soldering to the motor and assembling the whole body with 6-8 new screws I pushed in the battery, turned the switch – and the body worked perfectly.

Khhmmm. In fact, only after repairing the connector of the main PCB, because it’s plastic latch was broken. Instead of the original latch I inserted a small piece of plastic foil between the flex cable and the connectors upper side. After finding the right thickness, and the right position (depth) – it was perfect.

(Last time I’ve seen on another method in a 300d body: cyanoacrylate glue in the connector….. Not a good idea. Connector damaged, flex cable damaged)

So, the 40d survived the repair, not even a fuse was blowing.
Amazing.